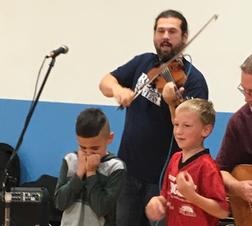 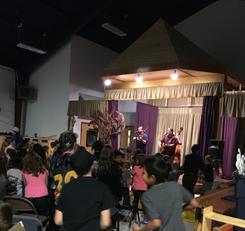 Dennis Stroughmatt also offers solo performances for universities, libraries, small groups and music camps in addition to his busy careers as bandleader for the traditional band l’Esprit Creole and the dance/swamp pop band Creole Stomp. Recipient of numerous fellowship awards in arts and humanities, Dennis takes his work as ambassador for the Creole French heritage of North America, and its language, music and stories, very seriously—serious fun. A frequent speaker for language conferences, including the keynote speaker at the National Conference of the AATF —American Association of Teachers of French, and workshop leader at conferences on Colonial American French, the National Honor Society, and at the Festival Internationale de Louisianne, to name just a few, Dennis is recognized as the authority on "Upper Mississippi Valley" French Creole culture, language and music.   Workshops for French (and non French) students at all grade levels, from Middle school through high school and college, can be tailored to the event and experience level of the organization. Creole French immersion, instrument workshops, history workshops and more are available. Workshop study guides can be provided to teachers before Dennis visits.

The State Historical Society of Missouri, The Illinois Humanities Council and the Illinois Arts Council have recognized Dennis’s work with fellowship grants and inclusion in funding for Speakers’ Bureau and Arts Tour grant rosters. He has also become a regular at major music camps across the United States including the famed "Balfa Camp" Cajun-Creole week in Ville Platte LA and The Montana Fiddle Camp.  The following program ideas flow mostly from past offerings of various speakers’ bureaus, and are all engaging presentations by one man and his fiddle—charismatic programs filled with an obvious love for the people he’s learned from and a passion for sharing this amazing heritage.

​French Creole Fiddle and Tales from the Illinois Country
Beginning in 1699 with the building of villages like Cahokia and Kaskaskia, Illinois, along the Mississippi River, French colonists from Western France and Quebec would merge with the native populations of Illinois, Missouri, and Indiana to create a Creole culture that is still unique from its cousins in Louisiana and Canada even today. This program will take the listener on a fascinating trip through The Illinois Country from both a historical and modern perspective, highlighting the enduring French identity of places like Prairie du Rocher, Illinois and Old Mines, Missouri through ancient French folktales, haunting ballads, and foot stomping fiddle tunes.

La Guillanee: Ancient French Traditions in “The New World” through Music and Food
Who could have imagined a tradition that began centuries ago, one now extinct in western France, would remain alive in the “Illinois Country” of Illinois and Missouri? The guillanee, originally a Celtic tradition to share food and bounty throughout the community during winter, began in Europe as a gesture of charity over two thousand years ago. In France it also brought the community together to celebrate the New Year and joie de vivre (joy of life). This musical and educational presentation will explore the European, Canadian, and French Creole roots of this now Missouri tradition as well as the fiddle music performed and food eaten during the festivities. (A good program for December, New Years, Mardi Gras, or year-round)

French Creole Music and Language from the Missouri Mines: 1723-Today
With the arrival of French lead miner Phillipe Renault in 1723, the face of Upper Louisiana and the future state of Missouri changed forever. Known by the French government as a credible source of lead and other minerals, southeast Missouri enticed French miners and eventually, voyageurs, clergy, farmers, and craftsmen. For over three-quarters of the eighteenth century, a steady flow of colonists from Canada, Lower Louisiana, and northwestern France formed the nucleus of a French Missouri that eventually included villages and towns such as St. Louis, Ste. Genevieve, Cape Girardeau, New Madrid, St. Charles, and the modern-day “Old Mines” region. The mix of French immigrants brought slight variances of French dialects, foods, and music into Upper Louisiana. But through creolization, a Midwest French Creole culture was born and has survived in Missouri for over 250 years. With discussion and song, this program explores the history of French Missouri and traces its musical and linguistic ties to Canada, Louisiana, and France.

Mardi Gras: The 300 Year Old French Creole Tradition
Though most often associated with states further to the south, Mardi Gras has its own 300-year history as a day of celebration and feasting amongst the Illinois-Missouri French, with a nod to western European and Celtic nature of Mardi Gras, how it relates to other celebrations throughout the year, and of course,  the Illinois French Creole songs performed by this widely-recognized folklorist and fiddler. ****And here are a couple pieces of music and folklore, not necessarily in the French or Creole heritage:Type your paragraph here.

Mussels, Moonshine, and Music: Mississippi Valley Migrant Life in the Early Twentieth Century
In a time almost forgotten, the Midwest and upper South were once home to thousands of Americans who lived and worked on the rivers as share croppers, fishermen, mussel shellers, button cutters, traveling minstrels, and even moonshiners. Once they were  the backbone of industry in cities like Muscatine and Cairo, here are their stories and the music they played, a slice Memphis and St. Louis along their way. [Note: this program has been included in the Illinois Humanities Council’s Road Scholars Speakers Bureau for the 2015-16 season. It is also available in other states, or for Illinois performances that are not part of the Road Scholars series. This program will likely be used as interpretive programming as the Smithsonian Institution traveling exhibit “Water/Ways” travels to Illinois venues this year.]

Play that Hot Fiddle! Old Time Radio and the Life of Southern Illinois Swing Fiddle “Pappy” Wade Ray
On live radio like Chicago’s “National Barn Dance,” Wade Ray gained national prestige alongside performers such as Patsy Montana and Rex Allen. Presenting the fast swing fiddling and humorous stories of his mentor Wade Ray, Dennis Stroughmatt will lead audiences through the early years of Old Time Radio and share how music brought America through The Great Depression, WWII, and beyond.