Consultant, Musician and Linguist for the 2018 Installation of the New "Arch National Park" French Creole Exhibit in St. Louis MO

In the Heart of North America is a story that remains to be told, the story of the French Creoles who founded the Illinois Country over three hundred years ago. Along the Wabash and Mississippi River corridors, today they remain with their songs, stories and language, and one music group continues to carry the torch of this enduring culture … Dennis Stroughmatt et l’Esprit Creole.  Originally from southeastern Illinois, Dennis Stroughmatt was taught to play fiddle by Missouri Creole fiddlers Roy Boyer and Charlie Pashia in the tradition of their fathers. He became an adopted son of the French Midwest Creoles who settled near St Louis, playing at weekly house parties or “bouillons.” As a result of physical journeys that also included also included French studies in Louisiana and Quebec, Dennis finds himself in a unique position as one who can speak knowledgeably and play in a variety of French styles. He has an innate sense of what is needed to get an audience on their feet, and keep a band on its toes. Dennis Stroughmatt et l’Esprit Creole are passionate ambassadors of Creole music and traditions, expanding interest and excitement in a region that has been ignored by the history books.

“I loved this program because this Scotch-Choctaw lad from Illinois had, by nature of his very nature, become a Missouri Frenchman, in a manner of speaking. He has become the living continuation of a vanishing culture in the hills near Potosi. He had studied with older people during the last decade of the 20th century, people who were not connected to the internet or MTV, and who gathered to speak the old language and to sing the old songs. Precious cargo, this store of experience and memory in the soul of Dennis. I felt lucky to encounter him and his French music, it is a reflection of a time past that we are fortunate to carry forward for future generations.” —Michael Bouman, Executive Director Missouri Humanities Council 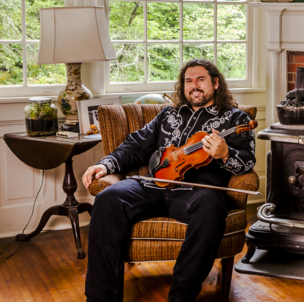 Fingers and bow flying, Dennis Stroughmatt takes listeners on a musical odyssey not so different from his own musical journeys into Upper Louisiana Creole Culture. Taught to play fiddle by local Creole fiddlers Roy Boyer and Charlie Pashia in the tradition of their fathers, Dennis gradually became an adopted son of the French Midwest Creoles living along the Mississippi River near St Louis. A vibrant blend of Celtic, Canadian and Old Time sounds, this music bridges the gap between contemporary Canadian and Louisiana Cajun styles. Preserved by families in the Ozark foothills, the music remains largely intact and true to the traditions that have been passed down for over three centuries.

A medley of music, language, stories, and culture secreted away in the Missouri Ozarks now has a voice in the tapestry of this world. With the blessing of the Creole people of the Midwest, Dennis Stroughmatt et l’Esprit Creole are its passionate ambassadors, expanding interest and excitement in a region that has been, in may ways, ignored by the history books. What many have considered to be long lost is alive and kicking.

It’ll make your soul jump, your head spin, and your heart glad to know that it is still here. As they say in the hills, “On est toujours icitte: We are still here!!

Learn About Dennis and L'Esprit Creole